Darling Nina, Love Jim – A romance in letters, To be published after 65 years 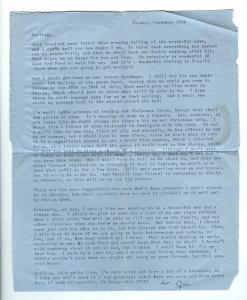 One of Jim's Letters 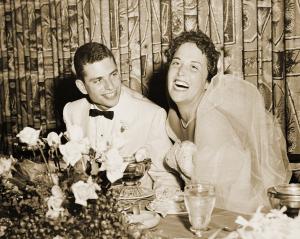 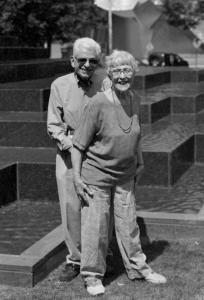 Nina and Jim - together for 63 years

A treasure trove of letters from an overseas courtship illuminate the start of a 63 year marriage.

CLEVELAND, OHIO, USA, December 21, 2020 /EINPresswire.com/ -- In July of 1954 a 22-year-old Nina Freedlander went on a blind date with a 24-year-old Jim Gibans. It was love at first sight – the two were inseparable. There was just one catch, Jim, an aspiring Architect, had a Fulbright in Liverpool and was leaving in September for 9 months! He promised to write to her all the time. But would their relationship endure the time and distance?

On May 10, 2018, after a brief illness, Jim Gibans passed away. Jim and Nina were married for 63 years. While Jim was unwell, Nina wrote him a poem every day. These poems were compiled into a single volume, Rosepetals… towards memory, and was published by ATBOSH Media Ltd., her longtime publisher which was just putting the finishing touches on her other book Celebrating the Soul of Cleveland. For the poetry book she asked that a type-written letter written by Jim to Nina’s father dated November of 1954 be included in the book. The contents of the letter? His proposal of marriage and promise to take care of her always.

Jared Bendis, Nina’s editor & publisher, was amazed. “You still have this letter?” he asked her. “I have all of his letters,” was her reply and she produced a small carefully wrapped package filled with letters (and their envelopes)! True to his word, starting in September of 1954, Jim wrote to Nina – and often! By November they were talking about marriage and he asked for her father’s permission and proposed via the letters. Nina even kept her father’s handwritten response. The letters are not just simple declarations of love (and the planning of their wedding) but a true sharing of the sights and sounds of Europe in the mid-1950s, Jim’s attention was always on music, architecture, and art.

Jim Gibans returned from his Fulbright June 30th 1955 and married his lovely Nina (in a double wedding with her sister) on July 16th! He then whisked her away to Europe for a 6-week honeymoon to share in person that which he could only write to her about.

And then US Army notified Jim that he had been drafted! So immediately after their honeymoon, Jim headed to basic training and in December of 1955 he began to write to her again. With Nina about to move onto the base with him, his last letter dated April 1st 1956 ends “Goodnight my dearest. Take care of yourself…with only one week to go. Love and a million kisses, Jim.”

And that’s it. From 1956 to 2018, with the exception of the occasional business trip, the two were inseparable! 62 years of togetherness preceded by this magical correspondence.

Nina’s publisher, Jared, immediately set upon getting these materials together for publication. And while Jim typed a quantity of his letter from Europe, much is handwritten, as is all of his time at basic training. In total of the over 350 scanned pages of documents only 200 of them are typed. Varying quality (and colors) of typewriter ribbons, blue air-mail paper, and strange tears and folds require that all transcription be done by hand. A few letters are undated and are still being placed in the correct sequence.

“What about your letters to him?” Jared asked Nina when organizing the documents. “Oh, he didn’t keep them” she laughs. There is a great irony in that. Nina is a celebrated Author and poet, but in this book she is simply his muse – from start to finish it is Jim’s voice – but the book is all about Nina.
ATBOSH Media Ltd. in Cleveland, Ohio is more than just Nina’s publisher. As an Agency Press they also serve as her literary agent for both the book and its derivative works including television and film rights.

“We don’t have a release date for this book yet,” says Jared Bendis. “Transcribing, organizing, and editing these materials is an enormous project. But, as we are in the middle of a global pandemic and as Nina is 88-years-old and the oldest person on the planet – EVER – to have Cerebral Palsy we figured now might be a good time to announce the project and share at least an overview of the story with the world.”
“Nina is very active,” adds Bendis, “she is online talking to friends, attending concerts, and she continues to write every day. Nina was also involved in a lot of film and TV work, so now in addition to publishing her books we are compiling an archive of all of her past media projects and making them available in one place. With Nina it can be hard to tell if you are looking back to preserve her archive or forward to publish her next book. We even have one book ‘on reserve’ that will only be published after her passing.”

There was one more treat in the box. An undated, though Nina guesses 1942 or 1943, 4-page letter from Nina’s Mother to Nina’s Uncle. Nina’s Mother was a native New Yorker. When Nina was 11 she visited her Uncle in upstate New York and he planned to take her and her sister into the city. The letter is a “must see and do list” of New York in the 1940s.

“This isn’t a book – but it could make a great TV show!” remarks Bendis. “When this pandemic is over there is a real opportunity to see what’s left from this time capsule of things to see and places to eat. How much of Nina’s Mother’s New York can one really experience 80 years later?”

Nina is also available for interviews and speaking engagements, virtually, of course.