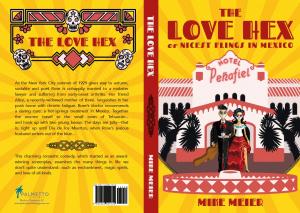 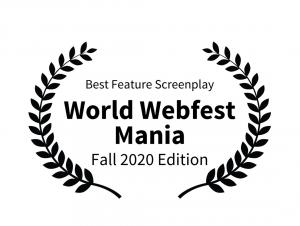 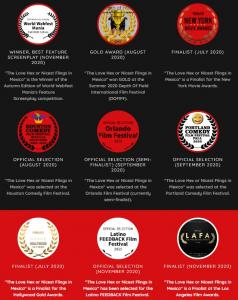 Awards & Recognition for THE LOVE HEX or NICEST FLINGS IN MEXICO as of November 2020.

The story has received several awards and recognition. The book based on the screenplay will be published on Amazon in a few weeks by Palmetto Publishing.

The story explores the many things in life we don’t quite understand—such as enchantment, magic spells, and love of all kinds.”
— Mike Meier, author of "The Love Hex or Nicest Flings in Mexico"
MIAMI BEACH, FLORIDA, UNITED STATES, November 30, 2020 /EINPresswire.com/ -- The movie screenplay “The Love Hex or Nicest Flings in Mexico” by Mike Meier, a Rom-Com that takes place in the year 1929, won “Best Feature Screenplay” at the World Webfest Mania's Feature Screenplay competition (Autumn 2020). The author Mike Meier explains where the idea for the story came from: “In the early 1990s when I was a law student, I once listened to a program on National Public Radio (NPR) where a young lady discussed the research for her PhD thesis. She mentioned that in the earlier part of the century, American women sometimes traveled to the hot springs in Mexico to engage in illicit relationships with young Mexican gigolos. I was intrigued.”

Years later, he tried to find that young lady and her research thesis. NPR does not archive programs for that long, however. So he contacted libraries and went through listings of PhD theses, but could not locate it. “If I had, I would have saved myself months of research. Well, I just had to do it myself,” Mike explains. But it took COVID19 to give him a break from his usual job to finish the screenplay. “I had the draft in my drawer for almost 30 years. With little else to do during the shutdown, I finished the screenplay in June.”

In brief, the storyline is: As the New York City summer of 1929 gives way to autumn, socialite and poet Rose is unhappily married to a mobster lawyer and suffering from early-onset arthritis. Her friend Alice, a recently-widowed mother of three, languishes in her posh home with chronic fatigue. Rose’s doctor recommends a daring cure: a hot-springs treatment in Mexico. Together the women travel to the small town of Tehuacán...and hook up with two young beaus. The days are jolly—that is, right up until Día de los Muertos, when Rose’s jealous husband arrives out of the blue...

The book, by Palmetto Publishing, is forthcoming on Amazon.

Mike Meier grew up in a blue-collar housing project in Germany. On his own since his teens, he has lived in several different countries, including Argentina and Japan, and has worked jobs such as washing dishes, repairing bicycles, and painting homes. When he is not writing books or award-winning screenplays, you’ll find him playing Latin and Flamenco guitar in the Washington, DC area. He holds a Master’s Degree in political science, as well as a Juris Doctor and Master of Laws. -- Magic spells are in Mike’s blood— his grandfather was the 1930s traveling magician and fortune-teller known as Wladi-Kami.

His dystopian sci-fi book JoinWith.Me is available on Amazon, at https://www.amazon.com/JoinWith-Me-you-want-see-future-ebook/dp/B08FB72J8T/ref=sr_1_1?dchild=1&qid=1606770562&refinements=p_27%3AMike+Meier&s=digital-text&sr=1-1&text=Mike+Meier