Shakespeare for Christmas from Armin Lear 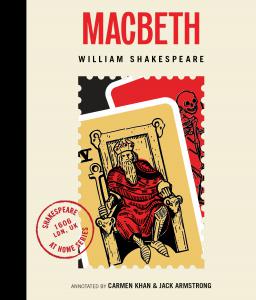 Front cover of Macbeth: Shakespeare at Home fully annotated by Carmen Khan and Jack Armstrong of The Philadelphia Shakespeare Theatre

Make Your Stocking Stuffer a Keepsake and Fun “Learning Event”

This edition will truly allow students to understand Shakespeare in a way no other edition can.”
— Annalisa Castaldo, Ph.D., Professor of English, Widener University
BOULDER, CO, UNITED STATES, December 14, 2020 /EINPresswire.com/ -- Armin Lear Press is offering a limited edition, hardcover format of Macbeth, Book 1 of the Shakespeare at Home series, fully annotated by Philadelphia Shakespeare Theatre founders Carmen Khan and Jack Armstrong, for $20 throughout the holiday season. The 6”x9” volume is built to last through generations of readers and is the first of an eight-book series called Shakespeare at Home. The books feature detailed notes on every line of the play – what is being said, why it’s being said, what the drama of the scene is, and why Shakespeare included it.

Why Macbeth? “Almost everyone knows the story of Charles Dicken’s A Christmas Carol, and the story of Macbeth has many fascinating parallels,” noted Khan, the artistic director who founded the company in 1996. “Both Scrooge and Mabeth crave power without concern for others. The two tales dramatize the downside of too much ambition.”

“And then there are the supernatural visitors!” she continued. “One faces witches with predictions, and the other, the ghosts of Christmas past, present, and future. We all know which one heeded the warnings and went on to have a happy ending!”

Given the continuing challenge of homeschooling, parents who have Macbeth at Home, have a tool to engage their school-age children in one of the primary works of William Shakespeare and make the connection for them between characters and plots that have “haunted” us at Christmastime for generations.

Glowing reviews from teachers include this:

“Khan and Armstrong have brought a fresh and innovative approach that will help students of all ages engage with the plays. Their Macbeth is the edition all teachers will embrace as it provides a structure that allows to understand the play as story, as literature, and as performance, all at once. This edition will truly allow students to understand Shakespeare in a way no other edition can.”
— Annalisa Castaldo, Ph.D., Professor of English, Widener University

Macbeth is also available in paperback and eBook formats.

About Armin Lear Press
Armin Lear was founded in 2019 with the purpose of publishing books connecting people with ideas that make our lives richer, more fulfilling, and happier. Its founders have 25 years of publishing experience. The company headquarters is near Boulder, Colorado with a production office in Arlington, Virginia. Armin Lear is a member of the Independent Book Publishers Association and distributes its books worldwide in English through Ingram.